Follow Jein Kyominias, a girl who does not entertain the established roles other females of the upper class take in her land. Her rearing in a matriarchal society has certain paths laid out. She has chosen to be an elite hunter instead of a mere matron. She is unique in her fondness for activities that are specifically bequeathed for men. She decides she will be different—strong and different that is.

Each person has a distinct trait that’s either held in reserve or pursued without inhibitions. For reasons that vary, the latter may seem an egotistic act. However, not for Jein. Taking a path other than the one she believes is right is like betraying her own soul.

This book features a young girl who deals with her individuality in admirably different ways. It tell a story of how she accomplishes exceptional feats in a world that draws an unyielding line between men and women. 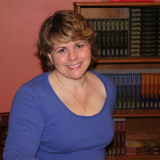 I’m author Lauren Lynne. The good side of growing up is that you can write whatever you want. The downside... now I can’t read it without my glasses! I have the soul of an adventurer but the heart of a coward when it comes to danger, yet I’m drawn to all things action-adventure, so this particular genre was a natural fit. You won’t find me bungee jumping, cliff diving or doing parkour because, well... I’m a klutz… so I write it. Think of me as an armchair adventure hound. I create characters who are much braver, tougher, more graceful and athletic than I will ever be. When you dream, dream big!

I love working with students who have a thirst for knowledge. I write for young adults because they are the age group I most love to teach. I grew up in a house where reading was expected, anticipated and enjoyed. I want to pass that joy on to my students. I do not write alone, but pull in my boys for real life teenaged insight. I also listen to my students.

I am a native of the Pacific Northwest, with its vivid and varied panoramas. When I’m not writing, I can be found spending time with my family, working with students, reading, gardening or hiking around Mt. Hood, the Columbia River Gorge or the Oregon Coast with my camera. I am also a graduate of both Oregon State and Portland State universities with degrees in education and science. Writing is my passion and I want to share my love of it and reading with you.

Thanks for visiting! Tell me what you think! Cancel reply

This site uses Akismet to reduce spam. Learn how your comment data is processed.